We haven't been playing too much T&T lately.  Alas, no one met the criteria to enter the Hall of Fame, so there will be no one admitted for 2019.
Posted by Branderwydd at 8:43 PM No comments:

I'm a little late getting this post up this year ("I don't feel tardy").  The character being inducted into the Hall of Fame for 2018 is Zircon Icemaw, dwarf warrior and master carver of bones, played by Alden.  This is also Alden's first character entered into the Hall of Fame.  T&T has rather fallen away this past year due to everyone being so busy.  We'll see what comes this year. 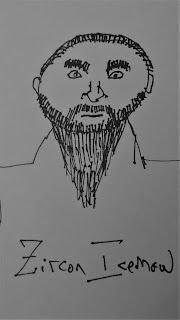 Posted by Branderwydd at 7:40 AM No comments:

While I don't get around to posting on here too much, we are still playing T&T a fair bit, slowly chugging away in our Master of the Moon campaign.  The PCs have rescued a long forgotten imprisoned prince, re-establishing the line of the Kingdom of Darkhold and fulfilling a prophecy; performed several assignments for Master Threnody of the Free Explorers Society (Delvers' Guild); explored sections of Mandrake Castle (the tent pole megadungeon of the region) killing necromancers and plenty of undead; had run ins with the Army of Peace soldiers (Lerotra'hh's army) stationed near Khosht; discovered the secret behind the old hermit's tower; and lots more that I'd need to review my notes to recall.

As is also our tradition, this year we are inducting Lunafilus Circaeum into our Hall of Fame.  Lunafilus is an erudite human wizard - more 'erudity' than most, with 'scheschmonic schminschmight'* - played by Aeddon. 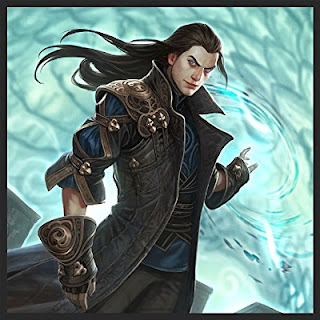 *An attempt at veiling a Talent in Demonic Insight that took his co-players all of three seconds to figure out.
Posted by Branderwydd at 3:38 PM No comments: 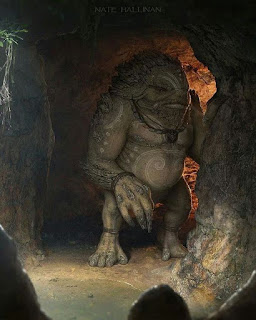 The character added to our Tunnels & Trolls Hall of Fame for 2016 is Terra the Troll, played by Nikki Fink.

Posted by Branderwydd at 11:18 AM No comments:

Probably not news to anyone, but Trollhalla will be going away permanently in less than a month.  The Inner Sanctum hasn't been accessible for months and soon the Outer Sanctum will gone.
Posted by Branderwydd at 5:10 PM No comments:

Every year we induct a new character into the Hall of Fame.  This time it is Flynce Bardsturd, a hobbit "bard" played by one Greg of the Hill of Burgers.  Greg is my veteran player going back to the very beginning, now no longer able to play due to losing his vision.  A sad state for T&T players everywhere.  Raise a glass for Flynce and to mourn the loss of Greg's vision - may Lerotra'hh grant him sight in the next world. 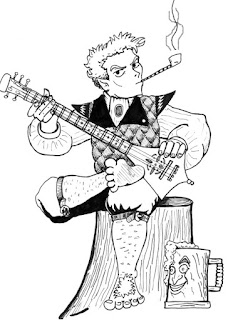 Posted by Branderwydd at 9:02 PM No comments: 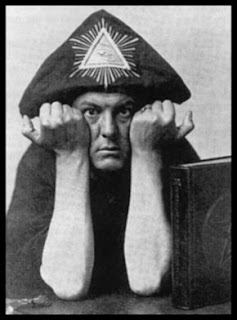 I've been sick for over a week now, missing work.  I haven't done much besides sleep and cough, but I've done some reading and T&T prep work for the new campaign.  I've also watched movies and videos - something I normally only do once a week or sometimes even less.  Anyway, I've seen four documentaries on Uncle Al and his "son" Jack, which have a lot of great ideas for gaming: magic (or -k, as he would prefer), adventures and quests, grimoires, demons and entities, rituals, roguery, mind altering substances, wizard guild politics, romance (in all meanings of the word), betrayal, and so forth. So, I guess it hasn't been a total loss.

Clearly, documentarians need to be a little more creative when titling their films....
Posted by Branderwydd at 11:46 AM No comments:


It was the 7th of Gunther in the year 1006 AK (which is the 2nd month of the year equal to our month of April). We are currently in Khosht. The city has been destroyed by monsters several times. The last time it was rebuilt there was a fort built on the southern bank of the Hunga River. The Seit in charge is Fierced, but it is being turned over to Nigira.
The current popular phase is BDM = “Before these Damned Monsters.”

We have received an invitation from Jared Silvercane to join the Free Explorers’ Society, aka the Adventurers’ Guild. As we walk up to the lodge we notice that the leaves on the trees are burning but never consumed. In our group is a male leprechaun named Leper, a female Haansfolk named Alhaanmora, a male Dargonath named Arthur, another human male named Lunafilus, a male dwarf named Dankit, and myself - a female half-elf named Wrayne.

As we entered the building the guards acknowledged both Lunafilus and myself before leading us into the main room. A small dragon flittered up to us, gesturing to follow him into the library. It was full of old wood with books everywhere and only a few people spread out doing research or consulting maps. In the corner at the table there was an elf with unusual armor who introduced himself as Jared. He offered to pay for our initial annual membership fee into the Society (50 gold each) if we were willing to bring back any books that we find adventuring and give him first choice to purchase them.

After we agreed, we headed back into the main hall where another group of explorers came up behind us. The leader started to laugh, sending bubbles up through water. He had a gorilla’s body with a brain floating in a jar for a head. After a few moments another one of his party members came up and whispered something in his ear. He looked towards Lunafilus and myself as we stared at him with annoyed looks, muttered something inaudible, and shambled away. This is the normal way that the Seventh Sanctum acts, of course.

A few moments later an old wizard walked toward us. He had black hair pulled back and wore dark grey robes. Leper mouthed off and was levitated into the air by the wizard until he complied. Threnody took us into a parlor with a large table to have drinks. He told us that he is interested in the castle. As we talked while playing ogre-ocre, he informed us that the ogres were once of the most intellectual kindreds in the world. Then Khazan cursed them.

Later the Haansfolk cast her cards for Threnody, doing the spread called “The Wheel.” The Wheel is also constellation of 8 stars. We are to meet him again on the morrow. He will provide with us important information at that time. As we left to head home, a troop from the fort marched through the city. Then came the Neon Knights marching to flank the troop.  The Neon Knights are controlled by the local government.  The light coming out of their visors is purple. Legends say that they only animate to protect the city.

A purple mist started to move through the city, so we ducked into an alley to avoid it. This was, however, to no avail as it was a dead end and we were enfolded into it. There were 6 humans that look to be possessed also in the fog. They moved to attack us.  At this point the leprechaun winked onto a roof. From this vantage point he hit one of the people with a sling stone, while we damaged the remaining. Whenever we damaged them the fog turned a darker purple in a flash. The purple fog coalesced around us, wanting us to be angry and kill things. Most of us were able to resist it but the dwarf succumbed and turned on us. Arthur attempted to subdue the dwarf while we fought the fog. The leprechaun luckily spotted the cloud’s the silver cord, winked down, and cut it.  This dispelled it. The Haansfolk was on the ground bleeding out.  Once she was stabilized we helped her walk to my family estate to rest. Along the way we dropped Lunafilus off at his family estate, agreeing to meet on the morrow.

We passed a group of green robed people with silver serpent necklaces. They are known as Vishtarians, who are humans who worship the snake god.  We passed the Street of the Many Gods. There was an old open temple with a black bell hanging in the courtyard. The Temple of the King: the legend is that when the king returns to Khosht the bell will ring. The Bellman’s Guild are like the town criers. They announced that Seit Nigira was officially appointed to take over Fort Bevits, resulting in an outcry in the city.  The buzz on the street was also that the Death Goddess was seen in the city by a beggar going into the Diamond Spider tavern and never came out. The owner said this wasn’t true, but the bum outside the tavern stated otherwise.

When we met again with Threnody, he sent us on a mission to travel to an area with an ancient and enormous tree called the Phantom Hallow.  Goblins stole several rare coins from a merchant wagon. We were charged to bring the coins back and give three-quarters of them to Threnody.  Jared also gets one of the coins and we keep the rest.

Posted by Branderwydd at 5:40 PM No comments:

Email ThisBlogThis!Share to TwitterShare to FacebookShare to Pinterest
Labels: Master of the Moon, Play Report

Master of the Moon Begins 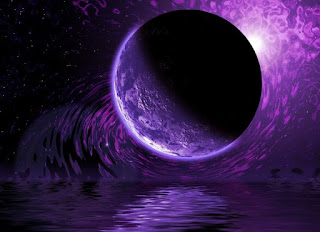 After long awaiting the Deluxe Tunnels & Trolls rules, we've finally started a new campaign.  I am the GameMaster.  I'm hoping to include some play reports and other notes as play develops.  No secret from my players, they will ultimately testing their mettle against Mandrake Castle - a megadungeon I've been mentally working on for a decade now.  The campaign is a tribute to all of my favorite fantasy authors, as well as game scenario writers.  It draws together strands from many T&T-related products and material I've culled from the Internet for almost twenty years now, but most especially Catalyst products like Lejentia, CityBooks, and Maps.  It pays homage to Bob Liddil's setting and his fabulous 30-sided tables and even - dare I admit it here? - two of the massive castle dungeons popular in that other game I hear people talk about sometimes.  Finally, we always name our campaigns after albums and then feature music by that band or artist while we play.  In this case, the name Master of the Moon comes from a Ronnie James Dio album.  His evocative lyrics, be they from Elf, Rainbow, Black Sabbath, Heaven & Hell, solo, or a side project will also be used to inspire people, places, and events that the PCs will encounter.

For clarification - our house rules are a mixture of 5.5, 7.5, and dT&T.  Details may be posted as they become relevant.  My campaign world is called Catalyst, and is based on Ken's Trollworld with my own modifications.  The biggest difference is probably that of Lejentian politics.  The Haansfolk appear in CityBook 3, but I've blended them with Thieves World S'danzo in my campaign.  Dargonaths come from Lejentia, but I've reduced them to only eight clans for a specific purpose, with other tweaks.  Nigira and Fort Bevits also originate in Lejentia.  Most Catalyst books are still available from Flying Buffalo, so you should definitely check out the line if you haven't already.  They are designed to be system neutral, but mesh well with T&T sensibilities.
Posted by Branderwydd at 5:36 PM 2 comments:

Branderwydd
Near Smugtown, United States
Gamer since 1981; contact me at branderwydd (at) hotmail (dot) com.

Sites to see, spent money at, or waste time when you should be doing something else